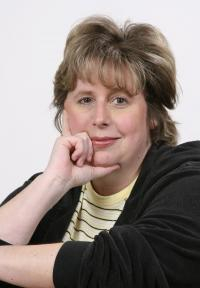 Nancy wants to use her medical expertise to open doors for others to follow her through. Her knowledge of the medical insurance industry and terminology has allowed her to push the coverage envelope, getting full coverage for her BAHA surgery and instrument. The road to that place was a difficult one but Nancy has barely allowed it to slow her down although she acknowledges a change of priorities. Nancy grew up in Bloomfield, NJ, the youngest of five children. She earned her BSN, married John, her high school sweet-heart, and went on to earn her MFN in advanced practice nursing while beginning her own family. Nancy and John have three children, Patrick, age 11, Jack, 7, and Emma who is 4½. Nancy became a Cardiac Clinical Nurse Specialist and helped to found the Congestive Heart Failure Center at Mountainside Hospital. She was focused and goal-oriented, enjoying her work and her growing family. When Nancy’s mother’s ovarian cancer returned, Nancy and John opened their home, renovations and all, to her parents who came to live with them for what turned out to be her mother’s last month of life. Nancy took a leave of absence to be more available to her parents, and to her young children including infant Emma. On Mother’s Day, several months after her mother’s death, Nancy felt her mother’s presence telling her it was now time for her to take care of herself. She was out to lunch with John, her sister and brother-in-law when she experienced facial numbness. The next day during a hospital (JCAHO) review, she experienced numbness in one-half of her tongue. In retrospect, she realizes she had been experiencing some one-sided hearing loss and balance deficits but hadn’t paid attention to them. A Romberg test, touching fingers to the nose, caused her to fall over and an MRI with contrast revealed a 3.7 cm acoustic neuroma.

Nancy did research and interviewed several doctors before proceeding to surgery. She concedes that even if radiosurgery had been an option, she wanted to get the tumor out of her head. She chose to have surgery at the House Ear Clinic in California. She was impressed with their surgical strategy, their responsiveness and the very large number of surgeries they were doing. They were doing as many surgeries in a week as local experts were doing in a month. Ironically, House Ear was "in-network" for her insurance while closer facilities were out-of-network. If she has any criticism of House Ear and of doctors in general, it is their inattention/insensitivity to the challenges that surgical complications present to the AN patient. Her translabrynthine surgery left her with facial weakness, single-sided deafness, spinal fluid leak (resolved with tight bandaging) and balance problems that were very hard to accept. After all, she was only 35 years old and at the top of her game. Now her children were upset by her absence and the changes in her appearance, and she had trouble accepting her reflection in the mirror. As if all of this was not enough, her husband had a melanoma around the same time. She had also lost a dear friend and colleague to a tragic and unexpected death. It was a lot to cope with.

On the other hand, Nancy was deeply moved by the support of family and friends. John’s cousin moved in to watch the children while she and John went to California. Her sister also came to be with her after the operation. A dear friend provided Nancy with a 1st class plane ticket to make the trip more comfortable. Nancy’s neighbors banded together to deliver full meals daily, and transportation for the children for three months! Her friends and colleagues at Mountainside Hospital raised money and paid for in-home help during her recovery! Family and church members were also great supports.

In June 2003 Nancy attended the national ANA conference in California. There she tried the BAHA test band and was determined to get the implant. She also heard Jackie Diels talk about her work with facial reanimation. She traveled to the University of Wisconsin in November to spend several days learning how to massage and exercise her face with feedback using a mirror. She hopes to be able to return at a later date but has not been successful with her insurance to date.

Nancy then visited Dr. Kwartler in NJ to pursue having the BAHA implanted. He was skeptical that insurance would cover it and quoted a large out of pocket cost. Nancy was determined that it should be covered. She contacted the "rep" at Entific, the BAHA manufacturer, to get helpful information. Then, with the help of Jeanette in Dr. Kwartler’s office, and the Human Resources Department at her husband’s employer who insured her, she was able to provide sufficient documentation/justification to have the whole procedure and the instrument covered.

Nancy had the titanium implant inserted in July of 2003 and the hearing aid was hooked up that October! After having had brain surgery, this procedure was a breeze! Within a few hours after the procedure, she was home making dinner for her family. It was done under IV conscious sedation and she experienced no pain. The area became numb for several months and she had a bandage on her head for a week. A nickel-sized area was shaved but is not visible. She has occasionally had a little soreness in the area but on those occasions she applies a little Neosporin and the discomfort is gone by the end of the day. She can even sleep on that side now! Nancy does make the effort to keep the area very clean, primarily using a toothbrush to clean the area to avoid infection.

Nancy has been very pleased with her results. Her hearing is much improved with the device and she does well even in difficult hearing situations. She concedes that nothing is as good as “real” hearing but she found it fairly easy to adjust to and a vast improvement over the deafness. In the beginning, when she wore it all day at work, she would find it fatiguing. She described it as almost like having a person talking in her head. On those days, she would take the hearing device off when she got home.

Nancy and John have not allowed their struggles to hold them back. If anything, they have shifted priorities allowing them to start their own business, a dream of John’s. Using his experience as a photographer, engineer, his experience with e-commerce and his MBA, he has opened the Finer Photo in Roseland. They develop film, have a portrait studio, and provide a full complement of digital imaging services. Nancy continues to work in nursing and nursing education. She looks for reasons for everything that has happened and tries to make something positive for each difficulty. Part of that purpose is education, and part is pursuing insurance coverage, which might make it easier for patients who follow her. Although at moments the pain of her losses affects her, for the most part she has a full and busy life and is determined to make the most of it.