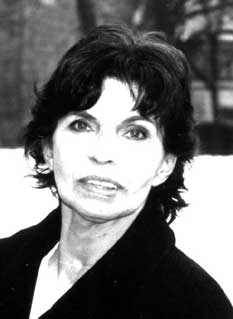 It was the night before she was to enter the hospital for brain surgery, in early 1993. She was alone and frightened. Her mother had just died unexpectedly and she did not want to burden her four grown children with her fears. She remembered a letter she’d read in an ANA/USA newsletter and picked up the phone. The voice at the other end was an AN surgery survivor in Chicago, and to this day Wilma doesn’t know who she was, but this stranger gave her the hope and courage to carry on. She has never gotten over the relief and gratitude she felt for the words of this kind stranger. Today when we call, the voice on the other end of the phone is Wilma’s. Helping other AN patients has become her purpose and given meaning to her life, and in so doing, she has been that support to many of us.

Wilma’s earliest symptoms may have begun more than thirty years before her acoustic neuroma was diagnosed. From the age of 24, she suffered serious balance problems and tinnitus. Over the years, due to these symptoms and progressive one-sided hearing loss, she was treated for Meniere’s disease, high blood pressure and other conditions. In 1992 an MRI finally revealed a 2 cm AN and she was scheduled for suboccipital (retrosigmoid) surgery. This was the beginning of what has been a long and difficult road that has left her with great pain and suffering, even while teaching her about her own strength and ability to contribute to others. Her surgery was followed by unilateral deafness, spinal fluid leak, bacterial meningitus and debilitating headaches. She was unable to return to her career, ironically in the hearing aid industry, and for a number of years was essentially housebound. A variety of surgeries and treatments followed, but it is only in the last few years that her headaches have reduced to a level where she has been able to return to full-time employment. At the time of our interview she had been headache free for three weeks, which she attributed to a new regimen of 200 mg doses of vitamin B2 twice each day.

Wilma still seems surprised by her role in ANA/NJ. The New Jersey Chapter was in its infancy when its founder notified the National and NJ members that she could not continue and was disbanding the Chapter. Wilma did not want to see it die, and contrary to her usual nature, reached out to Atlanta to see how to revive it. With their guidance, Wilma wrote to all AN patients in NJ known to ANA/USA. A meeting was scheduled and 24 people showed up. ANA/NJ was reborn and has continued under Wilma’s stewardship ever since. Also, following one year of service on the National Executive ANA Board, in 1998 Wilma was elected Secretary. In her quiet, unassuming way, Wilma has channeled her own pain and struggle and made it her mission to help others. Diagnosed in 1999 as having a 1 cm regrowth, she has joined the growing list of members in the “wait-and-watch” category. What else has Wilma learned from her experience? “None of the things I anticipated might happen did, and things I didn’t worry about did happen. Now I live one day at a time and don’t worry ahead of time” . . . . a good lesson for all of us, if we are able to live it. Somehow, through all of the adversity, Wilma has found the silver lining in her pain and suffering. Having had a 2 cm acoustic neuroma removed suboccipitally in 1992 followed by Gamma Knife radio- surgery in 2003, she says she has no regrets. “I’ve been given the gift of compassion for others because of my own experiences, and the ability to give hope and strength because of it. ” Her gift is to take those experiences and use them when new patients call her seeking support. This has given her life great meaning that enriches her as it helps us. Wilma feels that the hard times she has experienced have given her the ability to appreciate the good times. The balance of both continue to weave through her life in amazing and complicated ways and the acoustic tumors have played an integral part in it.

Wilma was divorced in 1981 but re-connected with her ex-husband around the time of her microsurgery. They began to see more and more of each other starting around 1993 and moved in together in 1997. She says it was really a new relationship because they were not the same people they had been when they were first married and had their family. She had learned that she could be independent and self-reliant. This gave her a greater self-confidence. He, perhaps as a consequence, no longer felt the need to take care of her yet in his own way he became more helpful in a way that she could appreciate.

When a regrowth was identified, Wilma joined the growing ranks of “wait & watch” patients knowing that she was not going to have microsurgery again. Her recovery had been complicated and difficult and it was just not a consideration for her. She found that she was calmer than she might have been at an earlier time. She felt as if “all of the bad stuff had already happened to her ”and she chose not to worry about it. After some years, her tumor doubled in one year to 2 cm so Dr. Kay recommended that she do something. She talked to Dick Barker (editor of this newsletter) and did her research, and decided to go to the University of Pittsburgh for Gamma Knife Radiosurgery. She took her MRI to them, which was reviewed, and a determination was made that she would be an appropriate candidate. Dr. Douglas Kondziolka was the neurosurgeon there. Wilma has no recollection of the procedure beyond seeing the instruments. She and Norm arrived a day in advance of the procedure, and met with the whole team. The procedure was done the next morning. She stayed over one night, and went home the next day. Wilma experienced extreme fatigue after the procedure but otherwise had no issues. She has now experienced all 3 treatment options and values the fact that she can share those experiences with other patients when they call her.

Two follow-up MRI’s have been done. The first one was 6 months post-radiosurgery and a second MRI done at one year post showed the tumor was necrotic with some shrinkage. She will have a 3rd status update in October of this year. She has had other health issues, as has Norm as well, but they have chosen to affirm and celebrate their lives together and the love they have for one another.

On May 8th, 2007, Wilma and Norm sent the following announcement:

“WILMA RUSKIN, NORMAN RUSKIN” are delighted to announce that they have once again married - each other!

The ceremony was held on Saturday, May 5, 2007, and was attended by the couple“s four children, their spouses, six of their seven grandchildren, a few close friends and relatives - none of whom were at the first ceremony in July 1958! The bride will keep her name...........

Wilma’s sense of humor is obviously still intact, as is her desire to help other patients in their times of need. She continues to serve as President of the Acoustic Neuroma Association of New Jersey, and to be the voice on the other end of the phone when any of us call the chapter for information and support. The NJ Chapter has resumed its affiliation with the National ANA which, in a seeming symmetry, is almost another remarriage after a period of divorce from the larger organization.

Wilma“s life, though never easy, has come into a certain balance which she accepts with grace and humility. She takes from every experience she has to give more to us, her fellow AN travelers.