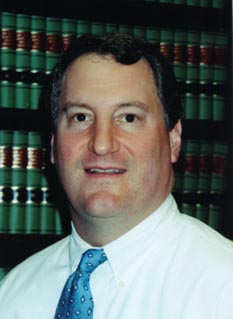 When Phil Stern speaks of his family, his love for and appreciation of them is palpable. He is profoundly grateful for the love, patience and support he has always received from them. He says that if there is a silver lining in all that he has gone through since his diagnosis with a 2 cm acoustic neuroma, it is that it was the catalyst for him to start his own law practice. This has given him the freedom to make his family his priority. He has been able to make time in his work schedule to attend his children’s assemblies and other activities instead of answering to outside demands. Phil was 34 years old in 1994 when he was first diagnosed. For several years prior he had occasional episodes of tinnitis that would last for a full day and came with muffled hearing for a week or so. He mentioned this at a routine medical appointment and was referred to an ENT. A hearing test revealed a 1-sided hearing loss so he was sent for an MRI. He remembers the doctor telling him he had a “good tumor in a bad place”.

Phil had a lot of questions and consulted with 3 neurosurgeons before making a decision about where to have his surgery. He made the choice to have his retrosigmoid surgery at Mt Sinai Hospital with Dr. Kalmon Post largely because of his experience and that of his staff who were doing about 2 such surgeries per week. Despite the surgery being postponed for several weeks as a result of some test results, he remained calm. He said he received so much support from his wife, sisters, mother and in-laws that he almost didn’t have a chance to experience anxiety. He was also very hopeful about the outcome. Tests revealed the likelihood of preserving his hearing was not good but he expected to be back to his normal life in a month or two.

The first week after surgery was lost in a fog of pain. A spinal tap was removed after 5 days and things immediately improved but he did have double vision, a loss of taste on his left side and a lack of saliva. He also had lost his hearing on his right side, which causes him some problems, but this has been relatively minor to him. He was on steroids for several weeks but when they were tapered off he began what would become years of crippling headaches. The first headache woke him up in the middle of the night but then they came 2 or 3 times a week lasting 12-14 hours at a time. They might be spontaneous or result from any slight jarring. He would find that he could not bear any stimulation such as touch, sight or sound during these episodes. Something as minor as a sneeze could set off one of these headaches. He is amazed at how good his 2 young sons, Mitch and Jared, were about it. There were times when they had to keep quiet for Daddy but they were very understanding and sympathetic.

Phil returned to work at a law firm part time several months after surgery with the help of his wife Amy driving him. There were times when he would get a headache at work and go sit in his car with the air conditioning on full blast trying to control it. He explored every medical option to deal with the headaches. The surgeons were unable to help. Doctors prescribed anti-inflammatories, anti-depressants, beta-blockers, calcium channel blockers and pain medications. He tried self-hypnosis and imagery, focusing on other things. Nothing helped. He went to headache clinics and to an acupuncturist with no relief. It was difficult to maintain a full productive work schedule and 9-years ago he left the firm on disability and opened his own office. There he specializes in business-oriented practices such as contracts, employment litigation and a variety of “transaction related” litigation matters. He is also legal advisor to ANA-NJ.

Phil’s headaches diminished in frequency and duration over the next few years and in 1998 the additional help of a chiropractor seemed to bring the problem under control. In 1999 Phil was diagnosed with congenital spinal stenosis that he anticipates will ultimately require surgery and which limits his physical activity to some extent. He has also had to have his gall bladder removed after 1 severe attack. He acknowledges that all of this has had to have an impact on his wife and kids but that if it has, they don’t show it. . As for Phil, he says "I can't change it. It is what it is and I accept that and count my many blessings."