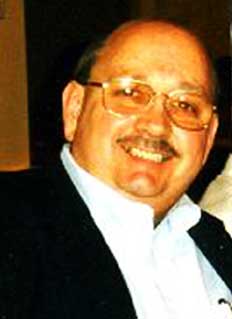 Harry Springfield was diagnosed with an Acoustic Neuroma in March, 2000. He was fortunate to have been diagnosed fairly early once he started having symptoms in his left ear. His primary physician, after listening to Harry describe his loss of hearing, immediately suggested an MRI to rule out a tumor. However, as Harry was surprised to learn, the problem was a tumor an acoustic neuroma, approximately 2.5 cm in diameter.

I heard of Harry through mutual friends. Ironically, he's a neighbor of mine. I didn't know him prior to his diagnosis, but we became acquainted and learned that we had a lot in common. Harry approached me about acoustic neuroma a little over a year after my own surgery. He wanted to find as much information as possible and had already started his research on Acoustic Neuromas. I told Harry about the web site for the Acoustic Neuroma Association.

After many appointments with different ENT specialists, Harry felt most comfortable with the ENT specialist and Neurosurgeon team at Johns Hopkins University Hospital. Harry was interested in finding a surgeon who had done many surgeries of this type. He was very impressed when the neurosurgeon at Johns Hopkins spent over 3 hours of his tine addressing his many questions and concerns. After this meeting, Harry felt confident in his choice.

The surgery was scheduled for October 3rd, 2000. Harry, with his support team (friends and family), went to Johns Hopkins and rented a townhouse close by the hospital. It was much easier on both Harry and his family to be nearby to travel to and from the hospital.

From the surgeon's point of view, everything went extremely well on the day of the surgery. Harry did lose his hearing in his left car, but the hearing nerve remained intact so there is still the possibility that in the future Harry's hearing can return. He has a small scar about three and a half inches long and a titanium plate in his head. He began healing on schedule and everything was looking great.

Although initially Harry looked and felt great (except for fatigue and loss of hearing), he did have some problems once he was back at home. For one thing, he had facial and eve pals), on die left side, although luckily, this went away almost as fast as it came. More seriously, he was starting to fall asleep at traffic lights and he developed problems with his sleep pattern, He immediately contacted doctors at the Jefferson University Hospital, where he is now being treated for sleep apnea.

In spite of these side effects, Harry feels very fortunate about where he is today, and sometimes jokes that he should be the "poster boy for acoustic neuromas!" He is now back at work full time as a Safety and Health Specialist with die USDA and is taking college courses on line, and except for the scar and hearing loss, there are no signs of long lasting side effects from the surgery. Harry was very lucky. and I'm telling his story so that all patients with this type of tumor who have heard horrific stories about microsurgery may find hope and faith in his success.

We know that size, positioning and type of tumor play a major role in the outcome of each individual whose life this touches. Since every situation is unique, once we are satisfied with the knowledge and information we gather on acoustic neuromas, we must go with our heart in our decision making and never regret what path we decide to take in our approach to rid us of this type of brain tumor.

Harry is thankful for the support of all his family and friends. He is now a lifetime member of the Acoustic Neuroma Association and is very grateful for the entire support and information he gathered through them. Harry can be contacted for any questions at This email address is being protected from spambots. You need JavaScript enabled to view it..