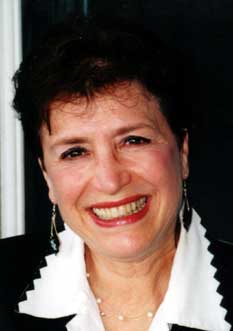 Phyllis met her husband at the age of 22 and was married four months later. It is apparent that although he died 23 years ago, she still feels the loss profoundly today. She was only 38 years old when he died of primary brain cancer, and she was left alone to raise their two children, June and Paul, then 14 and 12 years old. Somehow between teaching school and tutoring, she not only supported them but saw that they got through college, despite her having been left with few resources.

It is not surprising that when Phyllis began to have acoustic neuroma. Symptoms in 1989, she did not follow up on recommendations that she have an MRI. She had a sensation of fullness in her right ear and of dizziness, but tests she had were inconclusive. After the first year, the dizziness subsided and she had hearing tests annually. Nine years later there was a big change in her hearing test and the ENT again advised her to have an MRI. Phyllis was not alarmed, believing that it could not happen to her children that she would have a brain tumor. Even when the covering doctor called her in to review her MRI results while her doctor was on vacation, she did not anticipate a positive finding. When he told her she had a 1.0 cm brain tumor and went on to describe her three surgical options, she was overwhelmed and angry. She resented his insensitivity and did not know where to turn to share her anxiety. In the end it was her cousin she turned to. Compounding this, it was the anniversary of her father's death, which had impacted her profoundly. Phyllis next turned to the Internet and found ANA USA which sent out their packet of literature, which she found very helpful. She turned to friends and family for advice on which NY surgeon to go to, and when several sources in widely divergent locations identified one surgeon, she felt confident and made an immediate appointment with him. Surprisingly he advised her to wait and watch, that is to have periodic MRIs to monitor her tumor's growth, rather than rushing into surgery. He said that he would do the same type of surgery at this juncture and with the same level of risk as he would up to 2 cm, and that there was no knowing if, and at what speed, the tumor would grow. She began having MRIs every 6 months which showed no growth. She then moved to annual MRIs, which have still shown no change. Although the doctor has said that she could move to bi annual MRIs, Phyllis continues to have annual MRIs to assure herself that any growth is not too great before she is aware of it. Her only symptom at this point is her one sided hearing loss for which she has had to make minor adjustments in her life.

Phyllis has had many other battles to wage in her life and presents an amazingly positive attitude despite all of it. She was nearly crippled for years by excruciating migraines as a young mother. This has been a factor in her decision to "wait and watch" knowing that many surgical patients struggle with headaches following surgery. More recently she had a pre cancerous lesion and also required a biopsy of a mass in her breast. She has also had to make adjustments in her lifestyle to accommodate her four herniated discs in her back. She treats this with chiropractic and acupuncture (her daughter is an Acupuncturist) and surprises even her doctor that she is not crippled with pain. His advice is that she continue to do whatever she is doing which seems to be serving her so well.

Phyllis lives in a condominium overlooking the Hudson River with an. outstanding view of the river, the Manhattan skyline and the George Washington Bridge. She appreciates it every day, feeling so fortunate to have gotten where she is in her life despite all of her adversities. She makes the most of her good friends, of her special relationship with her mother, her children and grandchild, and she takes nothing for granted. She says she "doesn't have time to get old." It won't surprise Phyllis if, by the time she needs it, a less intrusive treatment for acoustic neuroma has been discovered.