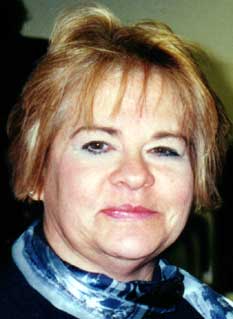 Karyn grew up in New Jersey but moved south, first to Florida, then on to Texas, to pursue her education. From High School on, she was plagued with headaches, visiting numerous doctors with varying diagnoses, tests and treatments. She even had two CT scans in those early years, both of which were negative. Despite the pain, Karyn went on to pursue a nursing degree specializing in respiratory therapy, at Texas Medical Center. After school, she pursued a career in public health, remaining in Texas. She merged her medical interests with her growing interest in computers and worked in clinical support, helping design and improve medical computer systems. Over a period of about 30 years, Karyn's symptoms progressed from chronic, severe headaches alone, to dizziness, nausea, balance problems, one sided deafness, and even small seizures. In March of 1997 she had one of these seizures on the job in front of a friend and fellow nurse who told her she must see a neurologist immediately. Working in a medical setting, she went to see a neurologist friend that afternoon. Upon hearing her symptoms, he ordered an immediate MRI with and without contrast. What he found was an 8 cm acoustic neuroma. entwined in her brainstem. He ordered her into the hospital the next day and restricted her to her bed. He told her that she was very close to having the tumor stop her breathing. Three days later she had a 12 hour retrosignioscopy followed by a second 12 hour surgery a month later. Tumor still remained, so she then received 28 days of radiation to stop the tumor from growing. Everything after the first surgery in March until July remains a blur. Karyn knows that her mother came to Texas between the operations but she was unaware of her presence. She also reflects on how difficult it was at that time for her recently adopted 13 year old daughter Jessika, who was a great help to her relearning all the basic life skills. She had to learn to walk, to talk, to feed and dress herself. Jessika was there by her side assisting her and adding meaning and purpose to her recovery.

Karyn and Jessika moved to New Jersey in July 1997 to be near Karyn's family. After several months living with her brother, they settled in Lodi. Karyn, who no longer drives due to continued perceptual deficits, found the town provides transportation services for the disabled which allows her to do her weekly grocery shopping and get to doctors appointments without continually needing to call on friends or family. She also immediately qualified for SS disability and received disability benefits from her prior employment. She admits that although she has struggled with depression, as many of us have, she feels very fortunate for these benefits, the local services, her daughter, family and friends. Antidepressants have helped her find the silver lining in her new life. She is surprised to have adjusted successfully to the life of a stay at home Mom pursuing her interests in making silk flower wreaths, traveling to see friends in Florida and New York, walking daily and working on the computer. Thanks to Karyn, ANA/NJ's newsletter is now online which benefits us all!

Karyn is very interested in getting the word out about acoustic neuroma to prevent others' tumors from being misdiagnosed for so long, delaying treatment until it is so devastating. Although she continues to deal with memory problems, takes longer to learn and process information, is slower to read and understand, continues to have weakness on her right side, balance problems, one sided deafness and headaches (which are less severe and frequent than before surgery) she appreciates how far she has come, how much she can do, and how available she can now be for her daughter. Her life is very different now but she has found a way to be thankful for, and to appreciate, the differences.