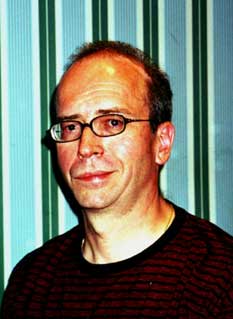 It's incredible to think that this accomplished man has navigated the roadblocks he has to get where he is today. Anyone would be proud to be a CPCU and Vice President at a major insurance company at the age of 45, with a lovely wife and two fine sons. To have gotten there despite incredible barriers is a testament to the human spirit and to the will to carry on and seize opportunity where others would find only defeat. This is Bob's story.

As a junior in High School, Bob experienced sudden unilateral deafness one memorable day while riding with his parents on the Garden State Parkway. It began with amplification of sound and ultimately led him to a hearing specialist. He was diagnosed with otosclerosis and the ensuing operation replaced the stapis bone from his inner ear with a prosthesis. Although he thinks hearing briefly returned, it was then forever lost. He was told the nerve was dead and nothing could be done. As a result of this early deafness and misdiagnosis, another 15 years would pass before he would know of the tumor growing in his head. In the interim he completed college and earned his MBA, married Phyllis and saw his first son, Patrick, born in 1990. It was an eventful year, with a new high pressure job, the lack of sleep that comes with a new baby, and Bob thinks he probably missed the evolving symptoms. A friend noticed that something was off with his staggering gait, and his wife encouraged him to see his eye doctor when he repeatedly complained about his right eye bothering him. That turned out to be a critical visit. Dr. Anthony D'Amato, (coincidently the author's eye doctor as well) dilated and looked into his eye and said "Bobby, you must go see a neurologist right away" and noted he would pray for him. Apparently he could tell that paralysis was setting in. Bob can't say enough about this doctor, and in fact all of the doctors and nurses who helped and encouraged him from this point forward. He emphasized that they were all "very encouraging and this was very important to know that somebody was there and cared and that you're not just a patient".

Bob went to see his Internist who sent him for an MRI that showed a 6 cm mass. He was immediately sent to a neurosurgeon, and after consulting with two, chose Dr. Hodosh with whom he had the greater rapport and feeling of support. The tumor was so large that there were no other options but surgery, which was scheduled for February 4 , 1991. He was put on steroids immediately. Before that date arrived, however, after dinner and movies out with his wife, he collapsed at home and was taken to Overlook Hospital where a 4 hour operation was performed to put in a shunt because the circulation of cerebral fluid had been cut off. Four days later, a 12 hour Translabyrinthine surgery removed as much of the acoustic neuroma as was possible, which was wrapped around his brain stem. He awoke to the news that his facial nerve had been severed and to find that he had lost the ability to swallow but he was still alive! He spent an extended period in the hospital and was transferred to JFK Medical and Rehabilitation Center where he had extensive physical and occupational therapy along with intravenous nutrition. Over time he went from being a fit 180 pound runner, to a feeble wheelchair bound 125 pounds. When in March, the runny nose turned out to be a spinal fluid leakage, he was returned to Overlook Hospital for a repacking, and Dr. Hodosh determined that as long as the site was being re opened, it was a good time to do a second Translabyrinthine surgery and remove the remainder of the tumor. Bob says of Dr. Hodosh, "I couldn't ask for someone who gave more of himself than he did. He promised to be there with me throughout my surgeries and he was." At some point around this time Bob also had a feeding tube inserted to enable nutrition to be delivered directly to his stomach.

The turning point in Bob's recovery began around June when his swallow began to return. He remembers that the first taste of that applesauce was better than a piece of steak! From then on his recovery began to proceed more rapidly, and after nine months out of work he returned despite still being on a feeding tube and walking with a cane. His employer was insensitive to his situation and made his work environment untenable leaving Bob a choice of quitting or returning to disability. He went out on disability again during which time he gained strength and sought alternate employment. He found a job in his field, as Insurance Broker, with an employer who had a reputation for being tough to work for. After a year, the company he had always hoped to work for recruited him and it took him only 4 to 5 months to make Vice President there. In 1992 a second son, Ryan, was born.

This was not the end of Bob's medical saga. He had a gold weight placed in his eyelid to assist him in closing his eye, as well as a tarsorrhaphy to narrow the opening and prevent it from drying out. This was followed by several procedures to return tone and innervation to the paralyzed side of his face including a Temporalis Transposition along with a Cross Face Innervation that took calf nerves and connected them from the functioning facial nerve to the paralyzed side. A year later he had a Hypoglossal facial nerve anastomosis for additional innervation, and in 2001 he had an operation to reposition his eye. If all that wasn't enough, he had a tumor regrowth that was treated by Linac radiosurgery in 1996.

How has all this changed Bob? "My perspective is very different," he says. "I have more empathy for people. In a way, I know what older people are going through. I am aware of how valuable life is, whether work, or pleasure, relationships... what I read, my entertainment." Having come so far, and achieved so much, Bob's future goal is to get his children through college and continue his career. He is grateful to family and friends for all of the support they have afforded him.