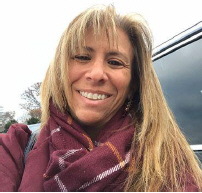 The bottom line is that being deaf is hard and it’s tiring. If it wasn’t for a wonderful, supportive, close knit family, Cindy wouldn’t have overcome so much. She had a close family growing up and her Mom is her best friend. She has a supportive husband and two grown children now and throughout her ordeal they held her together.

Cindy’s troubles came packed together in way too short a time period to not be overwhelming. She had lost her left hearing gradually, probably due to a cold, so when she was diagnosed with an acoustic tumor in her right ear it was alarming. She held out as a ‘wait-and-watch’ for several years but when the tumor showed growth, she felt it was time to act.

Cindy was nothing if not thorough in her research and exploration of her options, but no doctors were especially enthusiastic about taking on the risk of her being plunged into total silence. In the end, after considering her options with doctors on both coasts, she chose Dr. Samuel Selesnick to do her retrosigmoid surgery, because if the 20% chance that she might lose her right hearing occurred, he could also do cochlear implants for her. Before she was able to do any of that, however, she was diagnosed with another medical problem which more urgently needed attention. She headed into the hospital for that surgery before she could proceed with the other. Thankfully it turned out not to be cancer as feared.

Six months later, Cindy was back in the hospital for her AN surgery. She couldn’t risk radiation because the scarring it would cause would preclude a cochlear implant and she needed to retain that option. Surgery was done at Sloan Kettering Hospital: and indeed, it left her totally deaf. Despite that she insisted on going to her son’s Junior High School performance in “The Beauty and The Beast.” At her son’s request, the school roped off prime seats for her. It was a silent performance for her, but she was there. Family is everything.

Cindy pushed hard to be scheduled quickly for a left cochlear implant (CI) wanting to move out of her silent world where communication was done at home with a white board. When the family gathered for meals, as they frequently did, her mom made sure to always provide pads, pens and markers at every seat ensuring she was included in the conversations. Her husband, kids, mom, stepdad, sisters-in-law, her niece and nephews, and her mother-in-law all went to unbelievable lengths for her. She is so very grateful.

The CI magnet was implanted at 6 weeks post AN surgery (on the opposite ear) and the hearing device was activated 2 weeks later. Amazingly, she could hear her mother right away, though not her husband, and she was unable to distinguish between her children. Her recovery from this first CI surgery was easy but the surgery later in the year for the AN side was much longer and more complicated due to scar tissue and complications from anesthesia. She had severe leg pain afterwards which turned out to be a blood clot requiring an emergency operation to save her life. She’d had seven surgeries in less than a year and a half! Hence, when she told her family, none of whom wanted a dog, that she wanted one, they didn’t have the heart to say no to her. It soon became apparent that Jet, as he was named, was her best medicine giving her comfort, companionship, acceptance and love. Cindy is sure that in an emergency, with her devices off, Jet would alert her to danger.

It is now five years since Cindy received her Cochlear Implants. Over the first year there were many adjustments to correct the programming to improve her hearing. She was initially nauseated by high frequency sounds, but this was resolved through programming adjustments. There was hope that the second CI would eliminate her tinnitus, but although much improved, it never went completely away. Cindy does very well hearing and understanding in quiet environments when she can also see the speaker’s face, but noisy environments remain excruciating. Sound and the constant work to interpret it is exhausting and causes brain fog. When Cindy takes off her CIs at night to sleep, she is plunged back into silence, which is unnerving. She has adjusted to a different life but has also been able to retain much of the good from her earlier life with necessary adjustments. There is little improvement these days in her hearing, which will never be like “the real thing”. Adding sign language is not a realistic consideration, due both to the difficulty of learning this other language and the fact that those she would communicate with do not sign.

Cindy needs hearing breaks after a number of hours due to brain fatigue. She has sought support and answers to her questions from social media groups, including those for Acoustic Neuroma prior to her surgery and for Cochlear Implant users afterwards. The CI group helped her early on to realize things would improve over time and with fine tuning of her CIs. Members helped her to deal with her anxieties such as going for her first haircut after getting her CIs. She was self-conscious about her scars and worried knowing she’d be deaf during the hair wash and cut when the external parts for her CIs were removed.

In the real world, Cindy finds people have trouble understanding that her challenge with understanding speech is not a matter of volume but rather acuity, and that often it just requires patience and rephrasing a few words to enable her to understand. She doesn’t like to call attention to her hearing loss and tries to manage without telling people. By all appearances, she is a normal, healthy young woman, but in reality, she is coping every day with the extra work of deafness.