The most common symptoms of an acoustic neuroma (VS) are hearing loss and a feeling of fullness in the affected ear, imbalance, dizziness or vertigo, and tinnitus (ringing or noise in the ear). Hearing loss is the first obvious symptom for the great majority of patients. Early diagnosis is often a challenge since symptoms vary and there is no typical symptomatic sequence. There have been cases of very large tumors that were symptomless until the acute stage. Delayed diagnosis and misdiagnosis are both not unusual. Many primary care doctors, or even ENTs, may never have seen a case of acoustic neuroma during their practice. Gradual hearing loss, for example, might be attributed mistakenly to aging or to the buildup of earwax. Or a sudden hearing loss, which sometimes occurs, could be misdiagnosed as Meniere’s disease, an abnormality of the middle ear that also has tinnitus as a symptom. Still, most doctors confronted with a case of hearing loss, plus tinnitus, and possibly one of the other symptoms mentioned above, would be likely to suspect a VS and recommend an MRI.

The ‘Gold Standard’ for diagnosis of acoustic neuroma (VS) is magnetic resonance imaging, MRI. By 1991, this remarkable technology replaced X-ray computerized tomography (CT), which was in use for VS since 1971 despite its ionizing radiation risks. When using thin slice sectioning and gadolinium dye contrast, MRI can help to identify even the smallest of tumors. This is important for spotting possible rare cases of bilateral VSs (NF2) where one of the tumors is often very small. Patients need to be aware that the strong magnetic fields generated by the MRI may not be safe for implanted medical or electronic devices and other metal objects in the body. MRI technologists will inquire about this before treatment can begin. The MRI scan is a painless procedure, although sometimes a bit too noisy for some people. For patients who may feel claustrophobic in the tunnel-shaped ‘closed’ MRI machine, a mild sedative can be used. 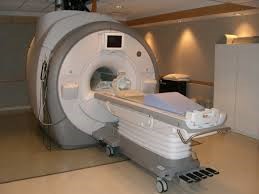